I’ve had less practice processing images of galaxies so this picture has been on my hard disk whilst I tried different processes to see what worked and what didn’t. The increase in focal length from 330 to 450mm switching from the Zenithstar 70 has made a big improvement in image scale but, with the exception of M31 & M33, groups of galaxies work better to fill the frame.
I’ve imaged this pair before but this is the first time I’ve managed to capture the Ha streamers from M82. This is 3 hours of data in 10 minute sub-frames. 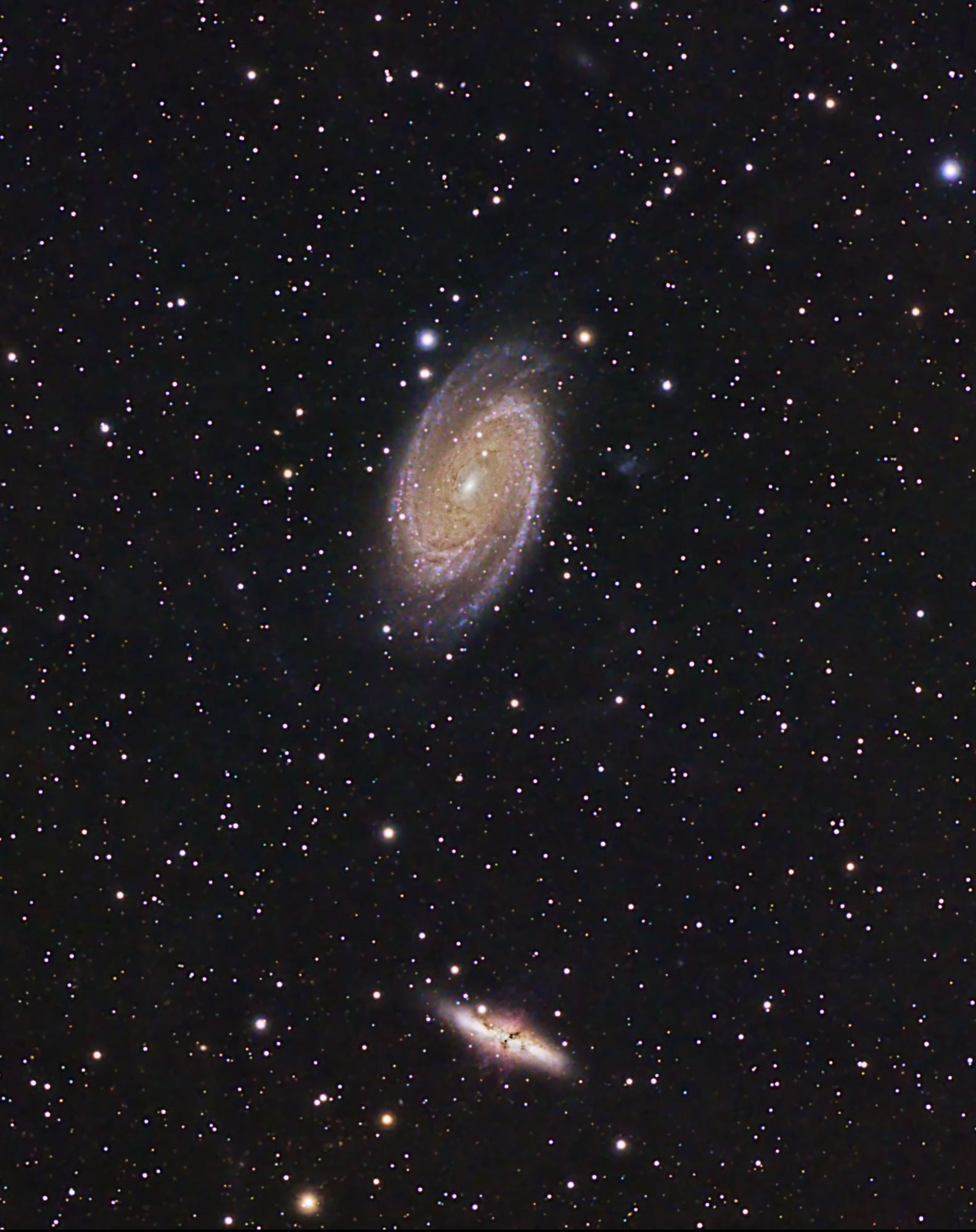 No complaints about the British weather this weekend. The clear nights at the Haw Wood star party were a treat. This weekend, with the moon waning, both Friday and Saturday night were forecast to be clear.

Friday night had some cloud drifting through from time to time. I was also trying to get to grips with CCD Commander before it’s trial license expired so I had some work to do. In the end, I gathered about 3 hours 40 minutes worth of 10 minute sub frames of this pretty pairing in Cepheus.

An initial look at the data looked promising. I did have a problem with the flat field frames though. These were taken at dawn by CCD Commander but I’d turned the coolers off beforehand. As a result, the flat wasn’t a good match for the light frames so I needed to redo these. I haven’t measured the bias levels at different temperatures but I suspect that it varies wildly.

On Saturday I setup early for dusk flats then waited for dark. During the day I’d taken the step of installing the new NoMachine remote control software, both on my Netbook and main PC. As the Netbook is Windows 7 Starter edition, I don’t have the option of running Remote Desktop Protocol (RDP). The new software has the advantage over the popular VNC of passing sound to the client PC. This should enable me to hear audible alerts from Maxim inside the house.

I collected a further 3 hours of data. taking me up to 6 hours 30 minutes. This is the longest I’ve ever exposed on a single target. The bright blue foreground stars create a severe challenge for the doublet Zenithstar which shows significant colour fringing. 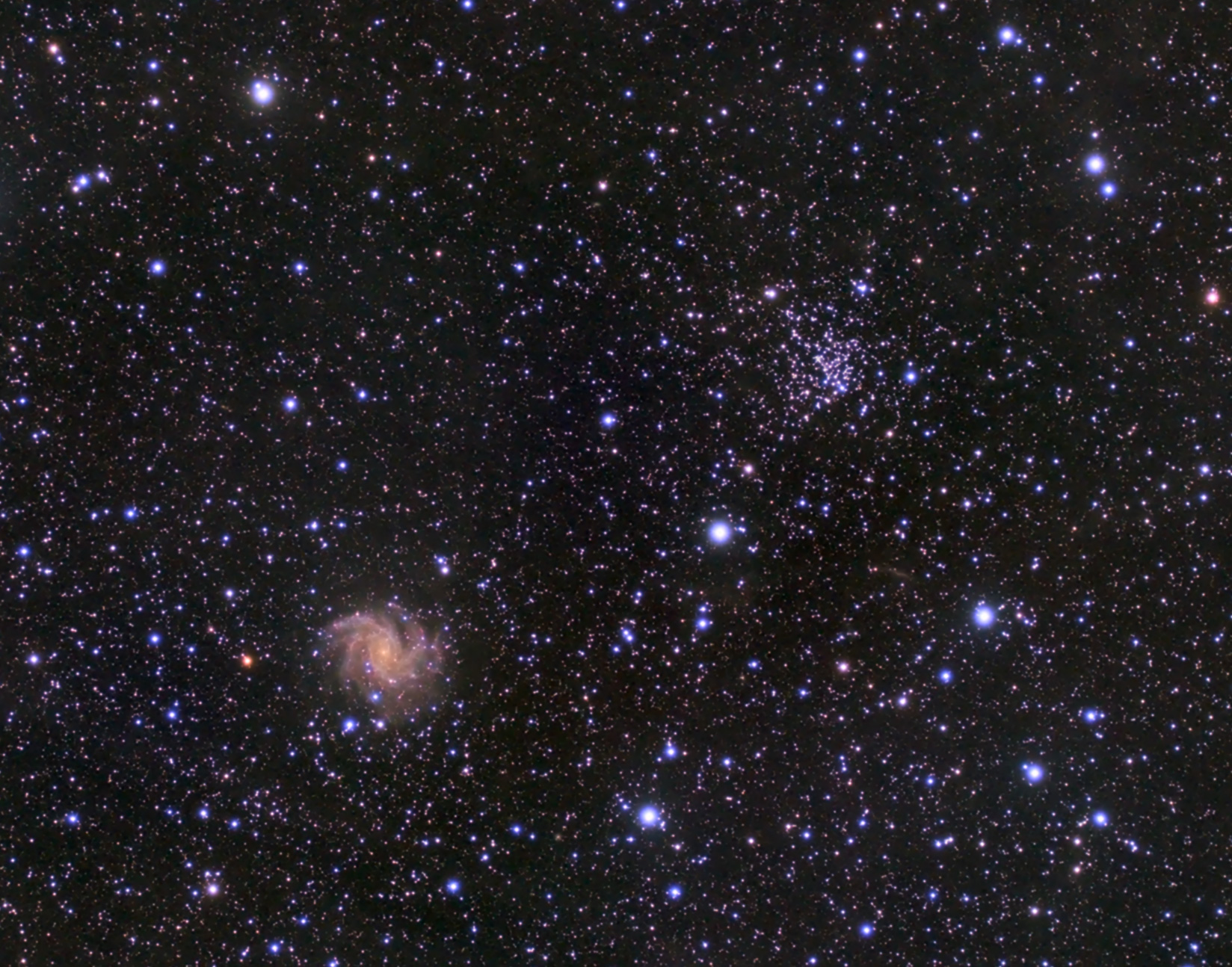 Having got the backend of the 60mm finder swapped for a guider adapter the next job was to sort an EQdir replacement for the SynScan hand controller. Initially I thought I’d use an FTDI serial-TTL cable but I’m short of USB sockets on the Asus Netbook and I want to connect my bluetooth GPS receiver as well so I went looking for a wireless solution. Hobbytronics sell a suitable bluetooth module and I found some example circuit diagrams on the EQmod website so set to work with a soldering iron. Here’s the end result, prior to boxing up: 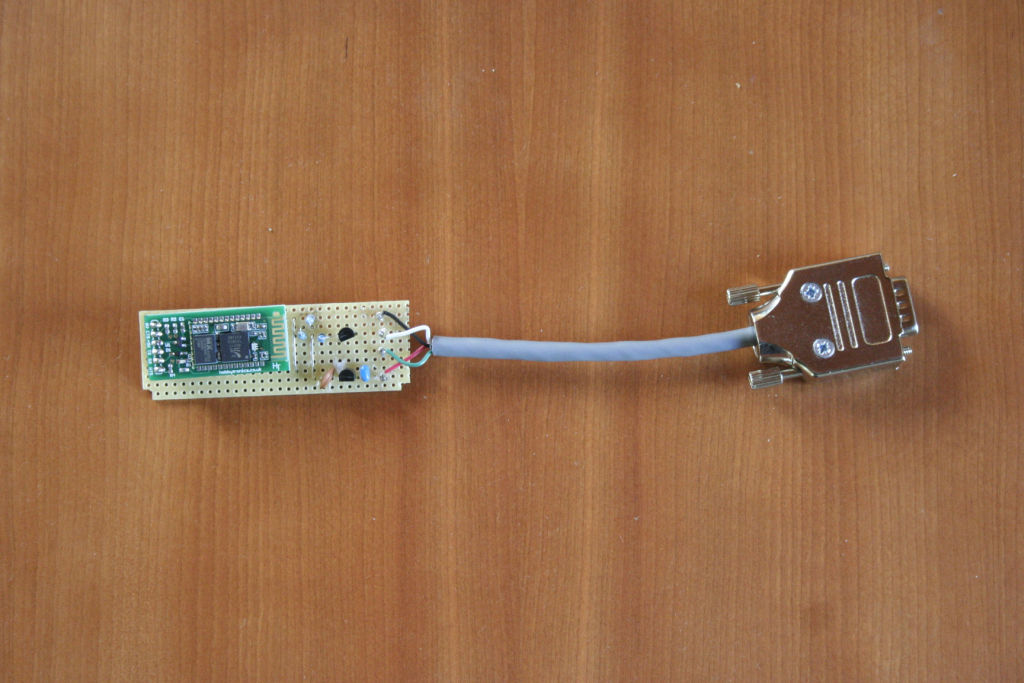 Testing revealed no problems so I put it in a small plastic project box and it hangs off the mount’s DB-9 connector.
The next problem was some star elongation I noticed when imaging NGC4244 on friday night. Initially I thought it was field rotation, but a closer look showed that the elongation was in the RA direction. While the guide log showed both axis having less than 0.5 pixel errors, RA was considerably worse and was bouncing between +/- errors. Next time out, I reduced the aggressiveness of the RA guide corrections and with a setting of 0.4 the problem was much reduced. As I previously mentioned, I’ve got a sizeable unbalance in the RA axis while I wait for a replacement counterweight so hopefully, this is the root cause of the problem.
Here’s the result of the tuning. 13 frames of 5 minutes each of M97 & M108 in Ursa Major. 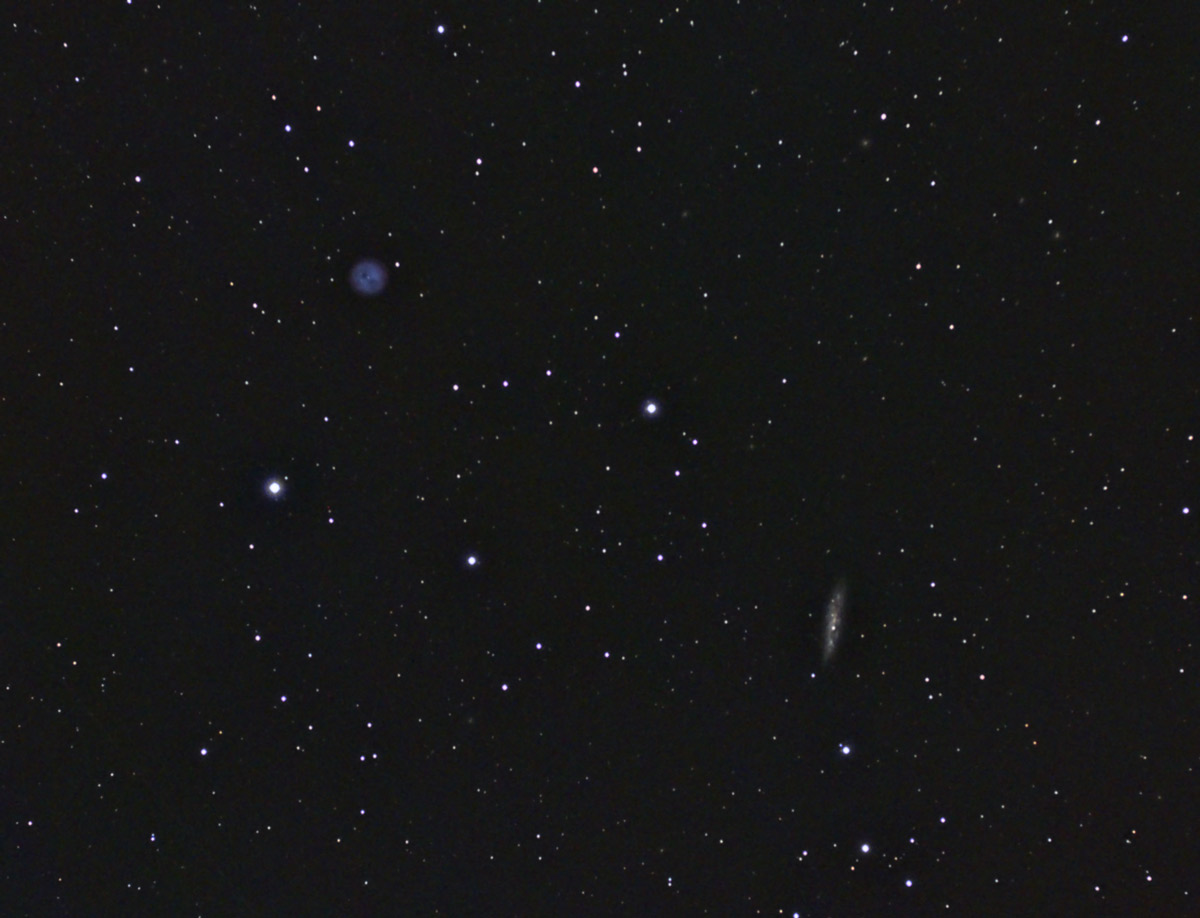 Comet Panstarrs has not put on the display that was hoped for earlier in the year but it has given a photo opportunity as it makes a close pass of the Andromeda galaxy on it’s way out of the Solar System. There’s no risk of collision here, the comet is in our Solar System and the galaxy is 2.5 million light years away. 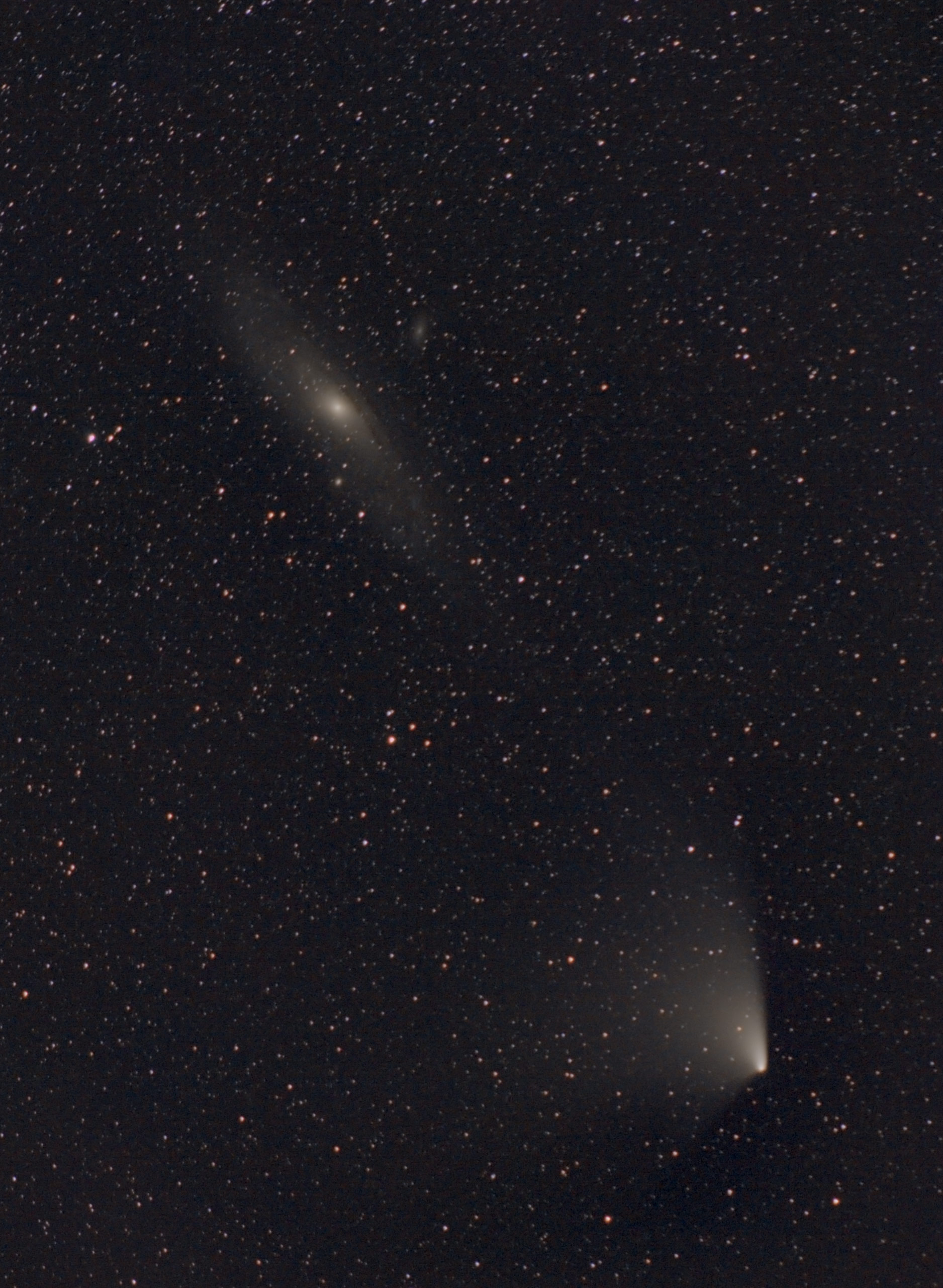 The images were acquired using a Canon 350D with a 75-300mm zoom lens at f/4.5. Eleven 2 minute exposures were stacked in Maxim, had the light pollution gradients removed in PixInsight and final processing carried out in Photoshop.

On Friday night the skies were actually clear for a while so I set the Astrotrac up for some images to test my Baader IR block filter under a sky with no Moon. The session was cut short by cloud but I did manage some images, pictures to follow.
Looking at the Society website I noticed that I’d imaged M83 using a Global-Rent-A-Scope system (now iTelescope) some time ago. A quick search of my hard disk turned up the original frames so I restacked then in Maxim DL and processed the L & RGB images in PixInsight. 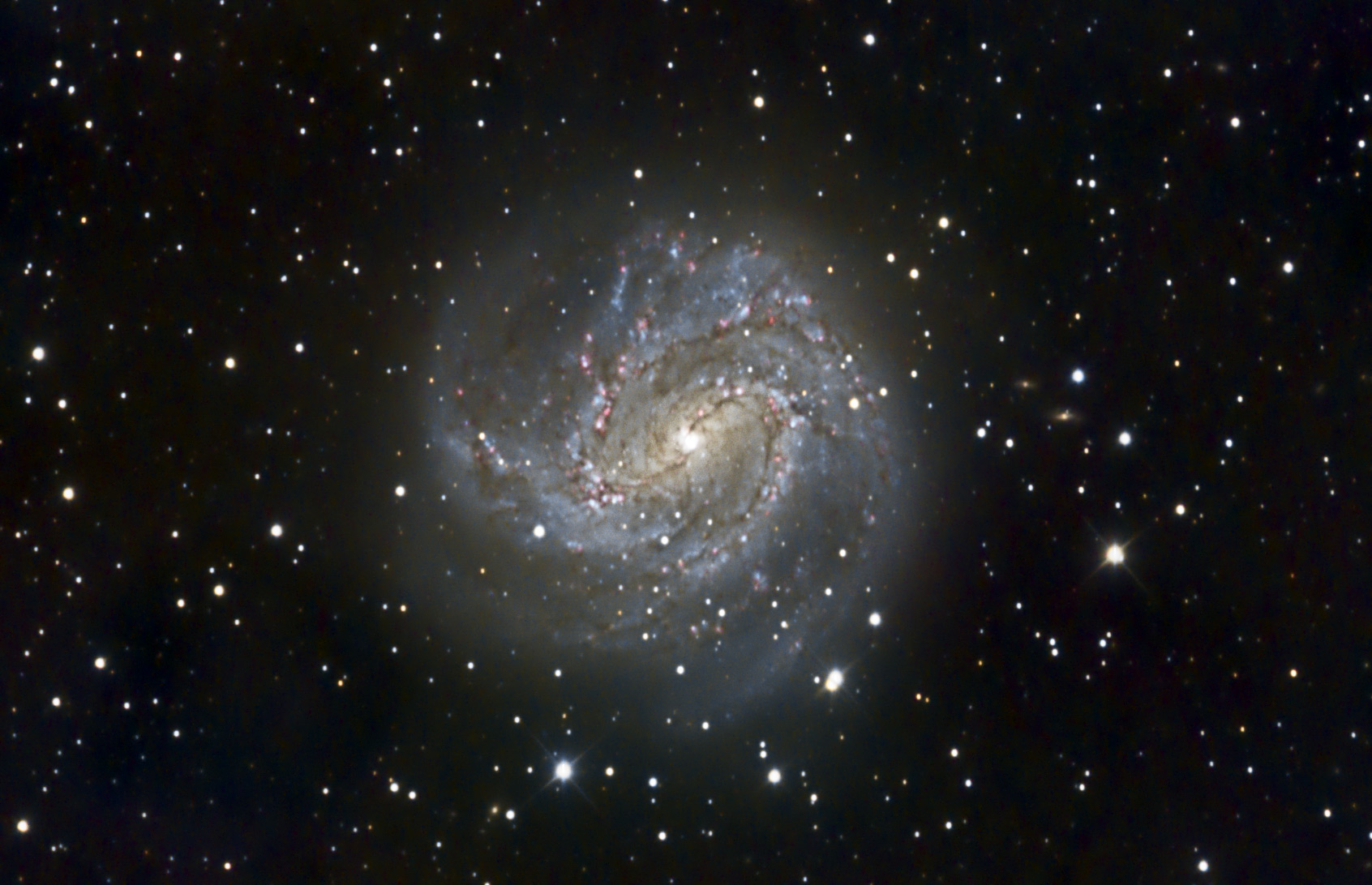 I came across a folder on my computer hard disk called ‘Pending’. This contained 16 images (each of 5 minutes) I’d acquired in November 2011 of M33 and never got around to processing past the initial stacking. Several attempts at trying out some PixInsight processes later and this is the final result. I’m particularly pleased as the Ha regions (NGC 604 & NGC 595) are well defined even with just the OSC camera frames. 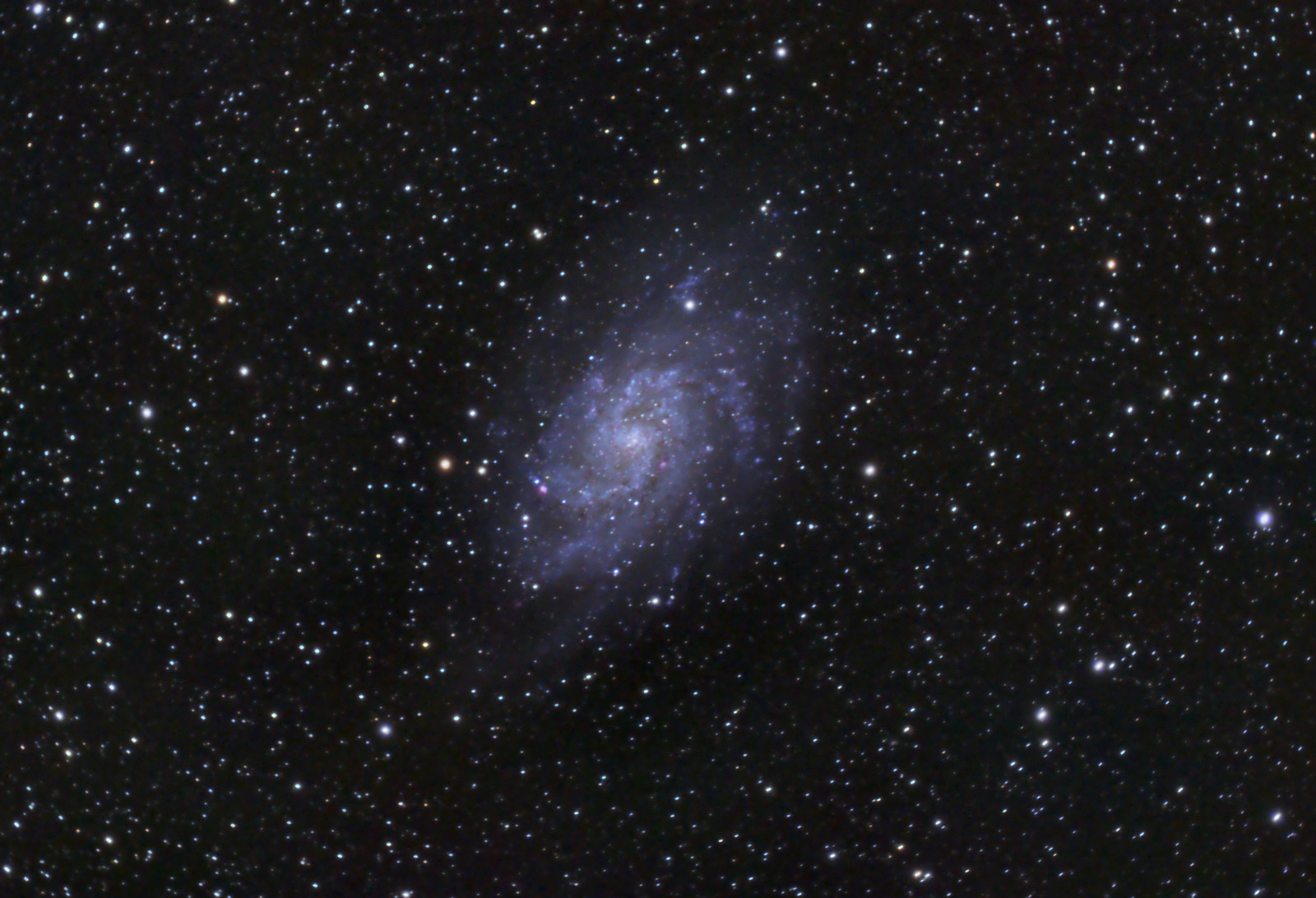 All the poor weather has given me a chance to look again at some of my older data to see if it’s presentation can be improved. As always, the answer is yes. There’s always something new to learn and I’m grateful to those individuals out there who are not only prepared to learn how to do this stuff, but also to share those techniques with others.

I’ve now removed the misaligned frames from my M31 image, there were also some 3 minute frames in the mix as well which have also been removed. I’ve probably pushed this data as far as I can take it and further improvements will require a few more hours worth of exposure to push the noise levels down. 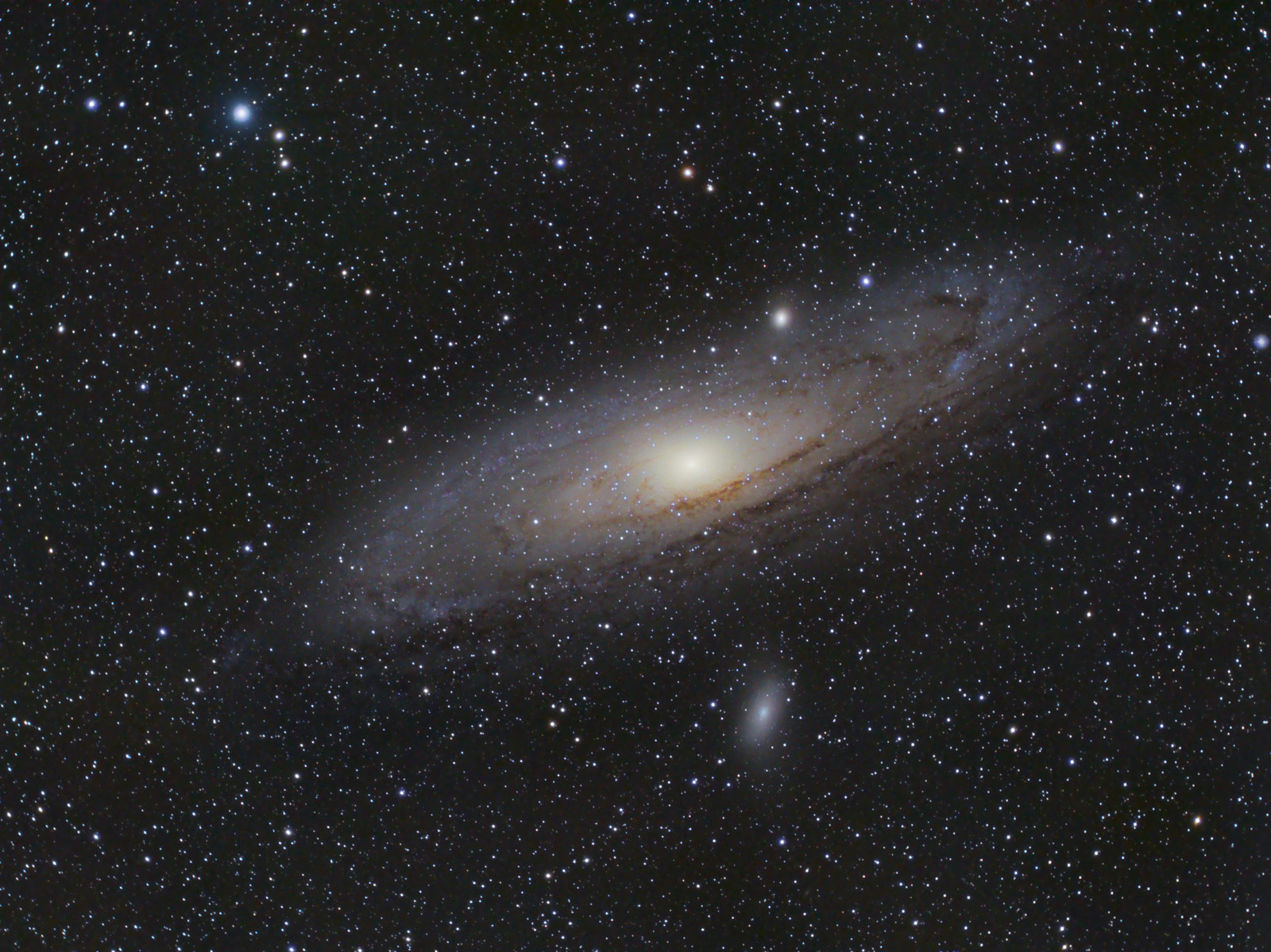 It’s always interesting revisiting old data to see if you’ve learnt anything about image processing in the intervening period. Different techniques produce different results and this time I’ve added PixInsight into the mix. PixInsight has a reputation for being impenetrable but there are some good video tutorials out there to help and I’ve started to climb the curve. The good news is; it’s worth the effort.

My previous attempt at processing some M31 images from the 70mm Zenithstar was here:http://andrewluck.me.uk/?p=14 and was one of the first images I took with the QHY9C.

Reprocessed using PixInsight (and a little Photoshop to finish): 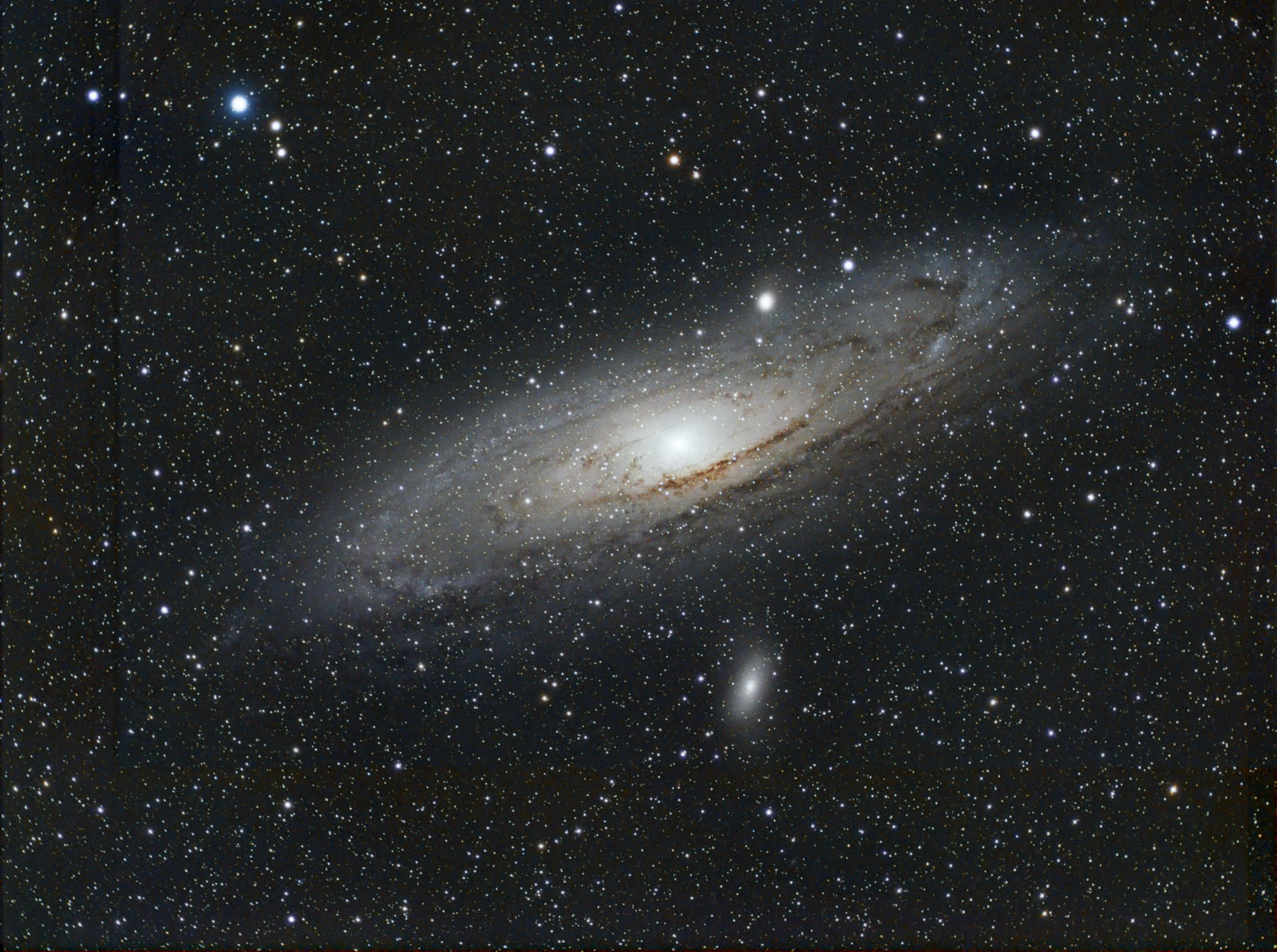 This is still a work in progress. It looks like a misaligned frame has made it into the image stack so I’ll have to go back to the beginning and remove it.

After my visit to the Institute of Astronomy at Cambridge the sky stayed clear and I paid a visit to the observatory to try and assess the tracking problems we’d experienced last weekend. Somewhat strangely, there was no repeat of the alt drift when pointing south although there is still a large periodic error in Az. Frame rotation is also problematic when pointing south so the maximum exposure I could use and still keep a reasonable number of the exposures was 15 seconds.

Abell 70 is faint so I didn’t hold much hope of actually being able to image it with this short exposure and my QHY9 single shot colour camera. To compensate, I took about 60 images. The nebula did not show up at all on any of the individual sub-frames.

Once mis-tracked frames were rejected I was left with 38 images which were bias subtracted and stacked with an SD Mask function. Field flattening was performed with GradientXterminator followed by a lot of noise reduction.

The nebula shows quite nicely along with the background galaxy. The nebula is about 45″ across and magnitude 14.5. The galaxy is magnitude 16 and the central star, 18.6. 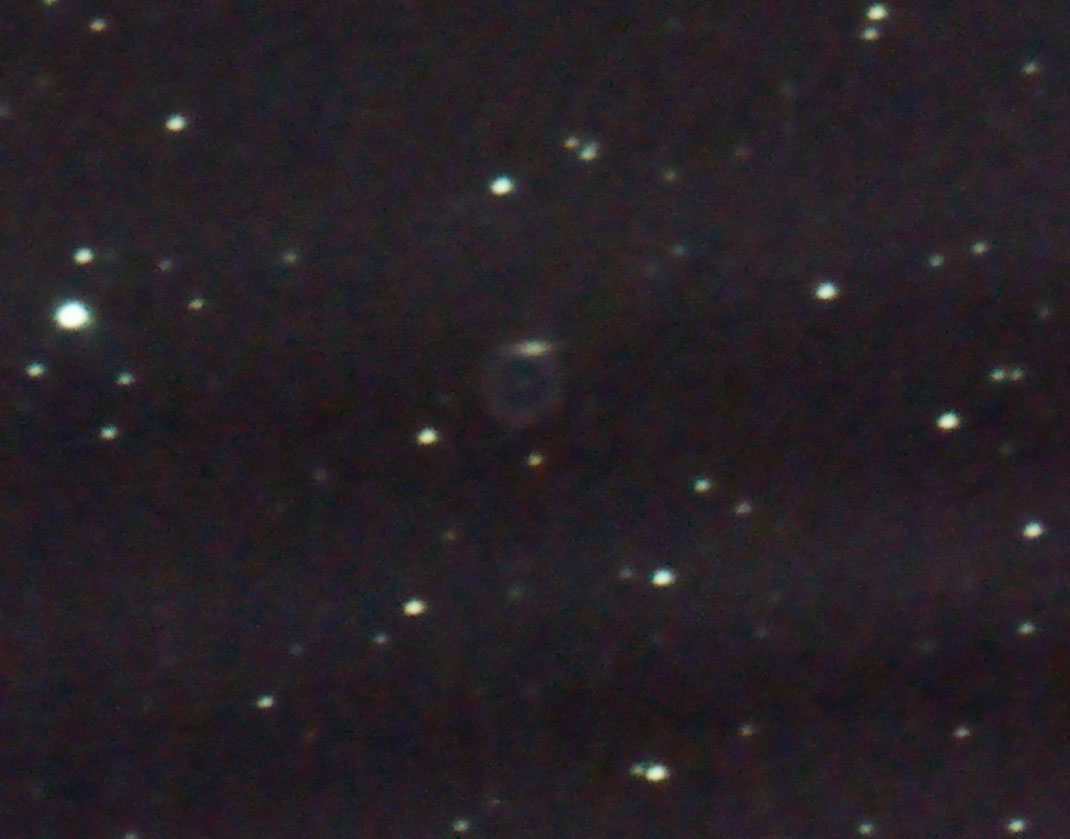 Last night was the first opportunity I’ve had to test some of the improvement work that’s been happening on the 20″. I had some early problems with icing in the Atik and a dead ethernet connection (someone had plugged a cable into the wrong port). Once these were resolved I started with NGC 7814, an edge on spiral galaxy in Pegasus.

Exposures were 10x 2 minutes, binned 1×1 with 5 second guiding exposures. I had to reject 2 images due to star deformation.The icing problems with the camera trashed my sky flats and I didn’t have any suitable dark frames so the images were hot pixel filtered before combining. 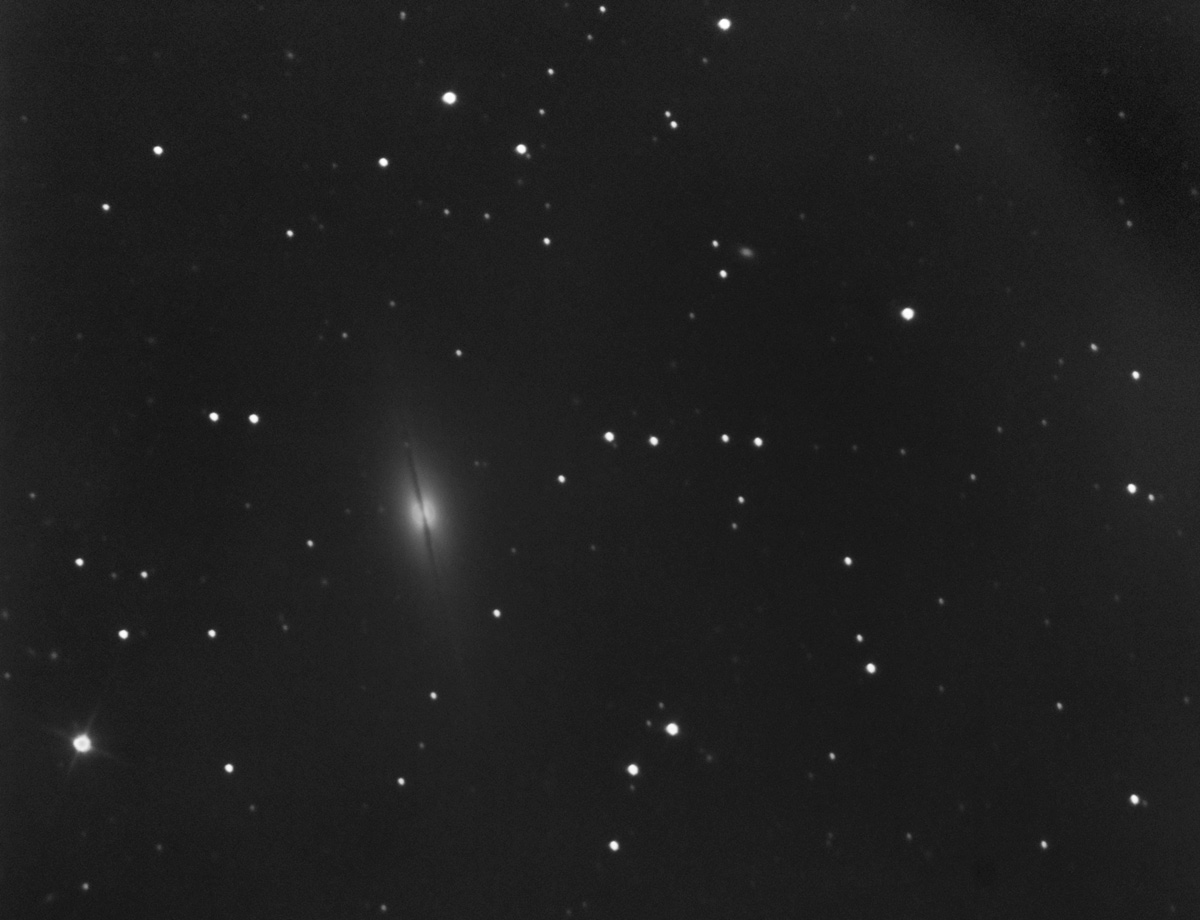 The second image was less successful. The target was NGC 7479, also in Pegasus. This time I attempted an LRGB sequence but many of the images showed jumps in the altitude direction. It may be that the altitude drive is slipping at certain positions. This will require further investigation. Here’s the 15x 2 minute luminance frames. 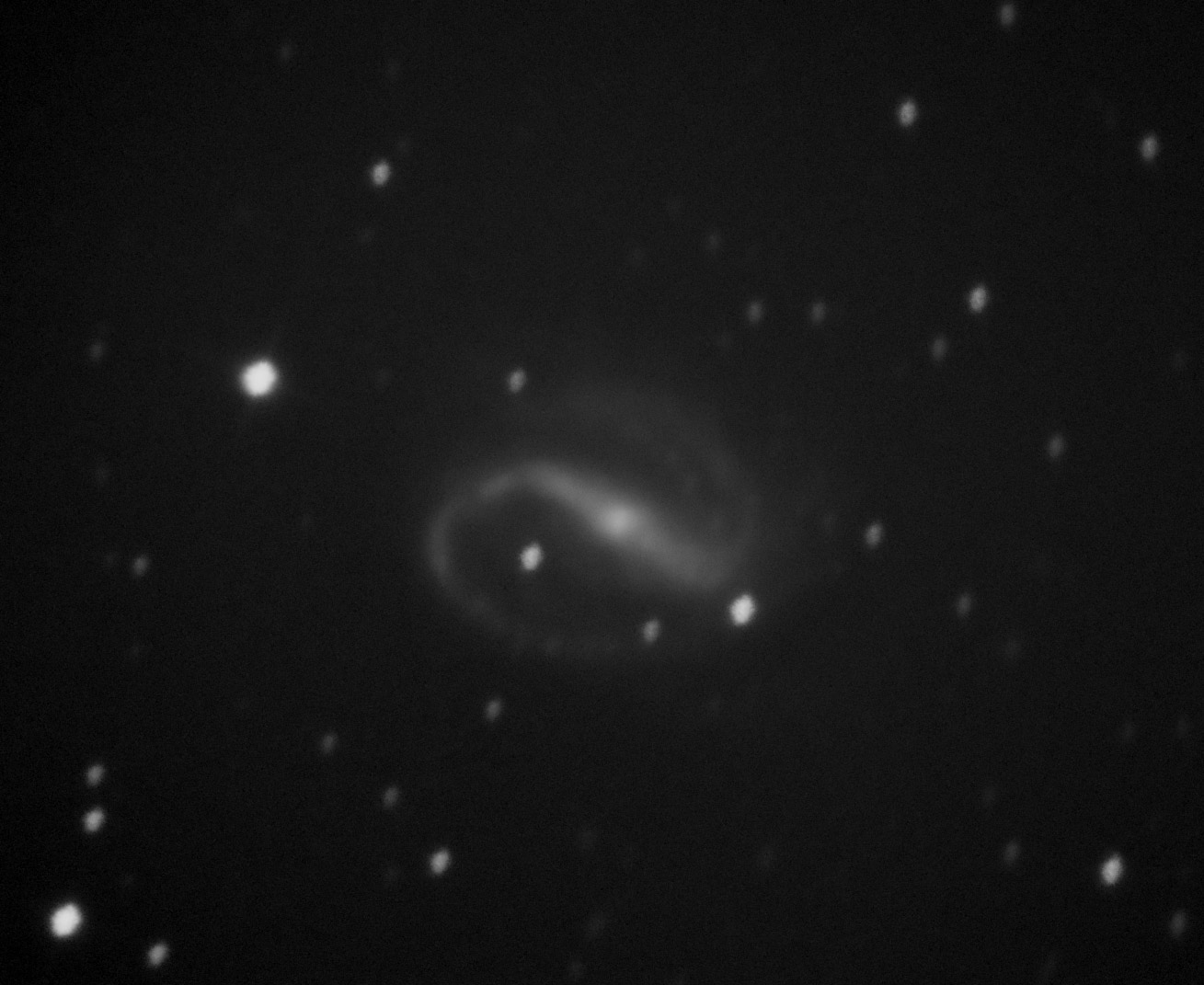