This image is a 2 panel mosaic comprising 28 hours of RGB exposures in 20 minute sub-frames. The images were acquired across 8 nights during November December 2018. Processing is exclusively with Pixinsight.

It’s been a while since I posted here. A good part of that has been the summer weather and general lack of night time at UK latitudes. I’ve also has an observatory build project running which has consumed time but is now nearing completion.

My last post mentioned the globular cluster M4 in Scorpius. M4 never gets very high from the UK and the window of opportunity for taking pictures is really small; really limited to just one new moon period in early summer. The southern horizon at Suffolk was exceptional and whilst scanning the sky with binoculars I noticed that this object was looking as good as I’ve ever seen it from the UK. Due to an oversight when parking the van and setting up the telescope I had the onsite wind turbine directly to the south so had to wait a short while for M4 to clear this and then took 3 10 minute exposures.

With M4 only 10 degrees above the horizon light pollution is normally a big problem and when looking at these images it did appear that I had a sizeable gradient across the image. However, further processing revealed that this is the due to the reflection nebula around Antares (just out of frame) and not the more usual sodium lighting.

…and the AirMass (Relative optical path length through atmosphere) at 10 degrees altitude? 5.1. 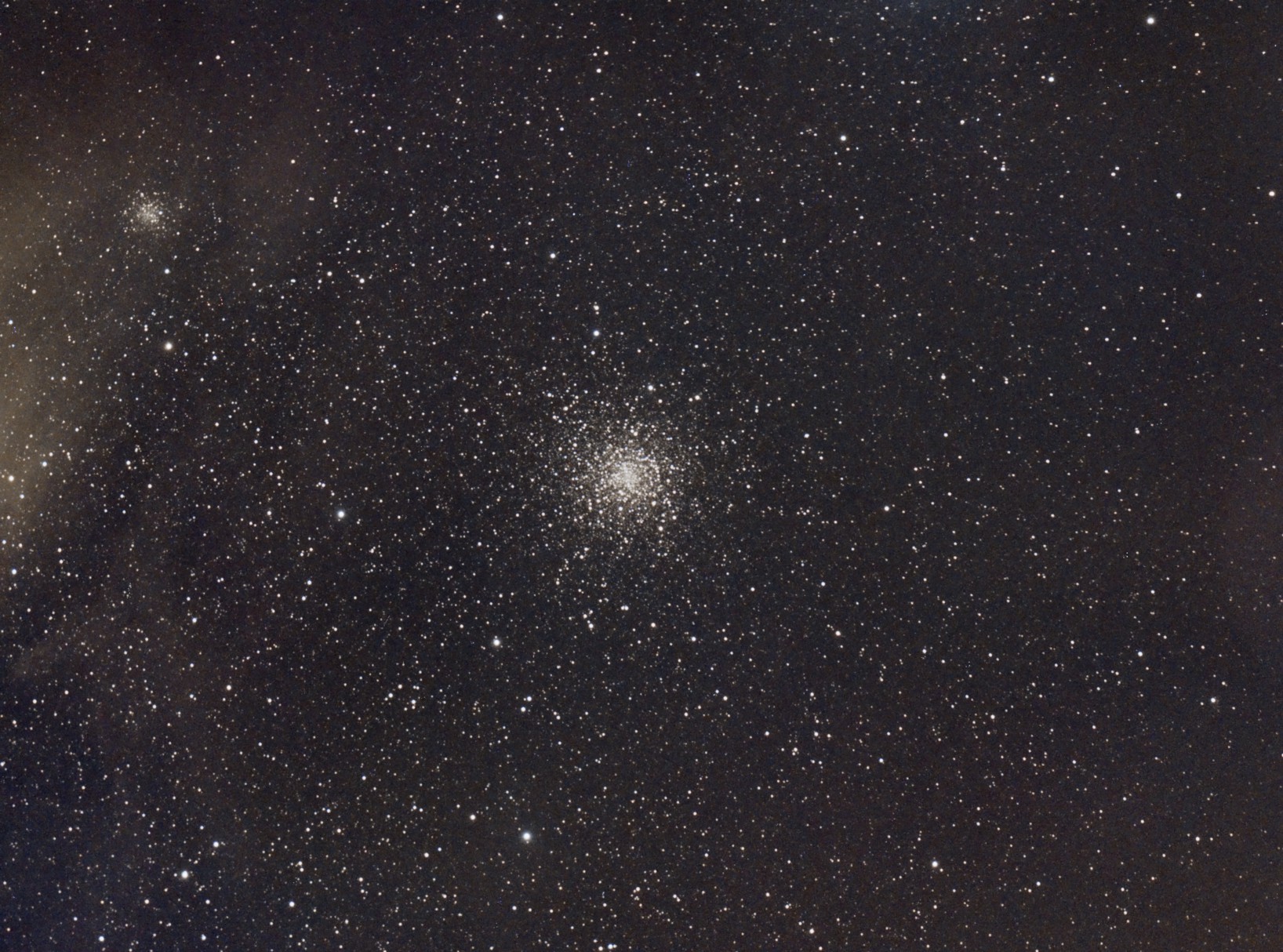 C2009/P1 made it’s closest approach to M71, a globular cluster in Sagitta on Friday night. While the weather people were predicting a gap in the cloud for mid evening, the gap turned out to be only 5 minutes in length!

Checking the star charts for the following evening showed the comet still fairly close and within the frame for the 70mm ZenithStar and Canon combination. The weather didn’t start too promising but cleared late evening for long enough to get five pictures before it clouded over again.

The comet core has trailed in this stack as I didn’t have enough images to process the comet and background stars separately and then recombine them. The two bright orange stars in the frame corners are Gamma and Delta Sagittae which make it really easy to find the cluster. 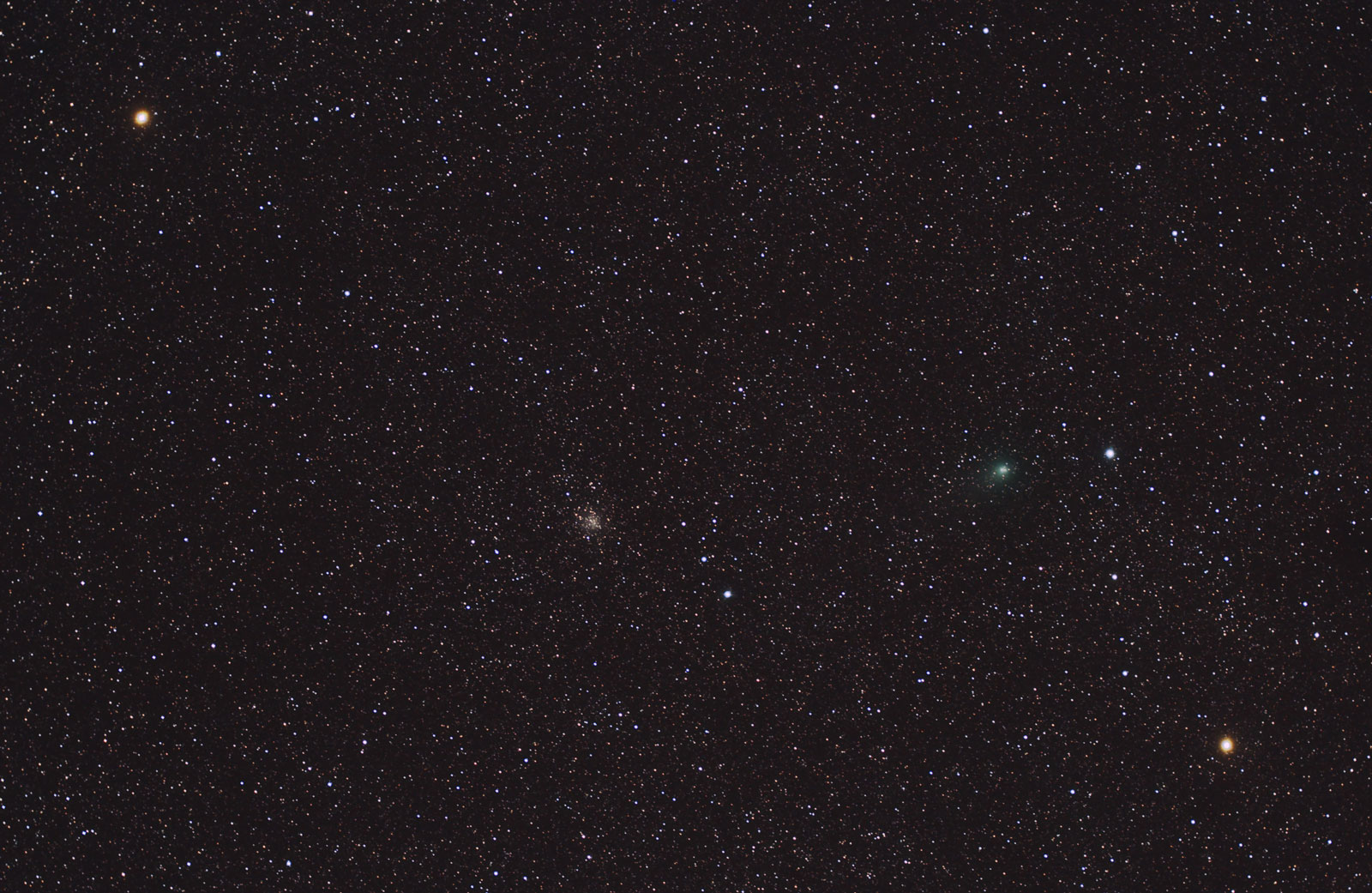 ZenithStar 70 with WO Field flattener III

We got back from the evening at Kielder at about 1 in the morning and as it was clear, albeit, not very dark I setup to take some pictures of M10 in Ophiuchus. By 2:30 it was already getting light and the dawn chorus was getting going but I got 15 3 minute exposures at ISO 800 for this image. Telescope is the ZenithStar 70mm F/6.

For the second part of the Saturday evening I turned my attention to M13 in Hercules. As the tracking appeared to be working OK I switched back to 3 minute exposures at ISO 400 and ended up stacking 16 images. Also in the image is NGC 6207, a faint galaxy just visible at the left hand side of the frame. 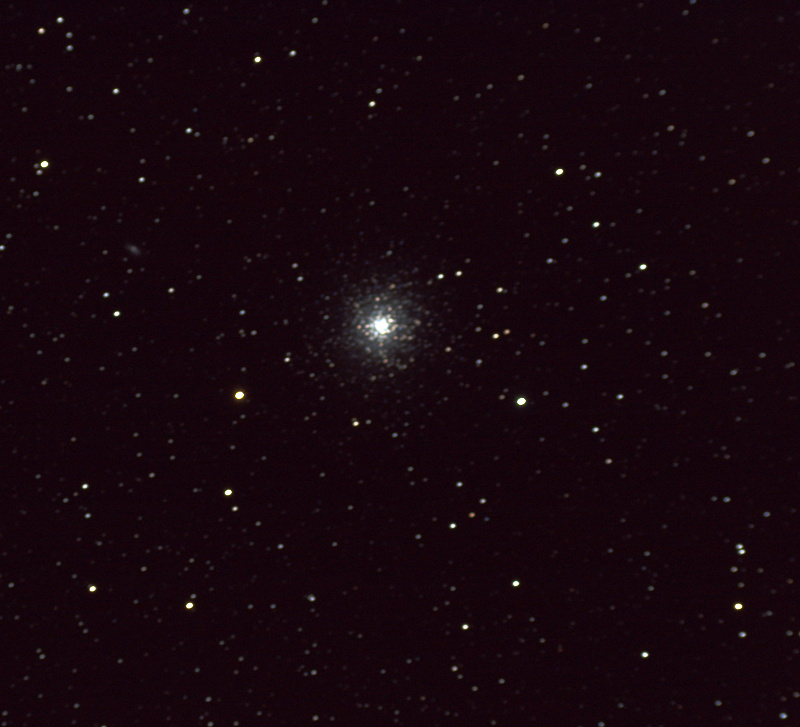 M13 is found in the constellation Hercules. Consisting of probably a million stars at a distance of 21,000 light years it is easily discernable in binoculars. First noted by Halley in 1714: “This is but a little Patch, but it shews it self to the naked Eye, when the Sky is serene and the Moon absent”.

Messier added it to his catalog in 1764. Messier noted: “In the night of June 1 to 2, 1764, I have discovered a nebula in the girdle of Hercules, of which I am sure it doesn’t contain any star; having examined it with a Newtonian telescope of four feet and a half [FL], which magnified 60 times, it is round, beautiful & brilliant, the center brighter than the borders”.

Determination of it’s true nature had to wait until the Herschels examined it with their improved telescopes of the 1780s. May 16, 1787. 20 feet telescope. “The 13th of the Connoiss. [M 13 = NGC 6205] is a most beautiful cluster of stars. It is exceedingly compressed in the middle and very rich. The most compressed part of it is round and is about 2 or 2 1/2? in diameter, the scattered stars which belong to it extend to 8 or 9? in diameter, but are irregular.” 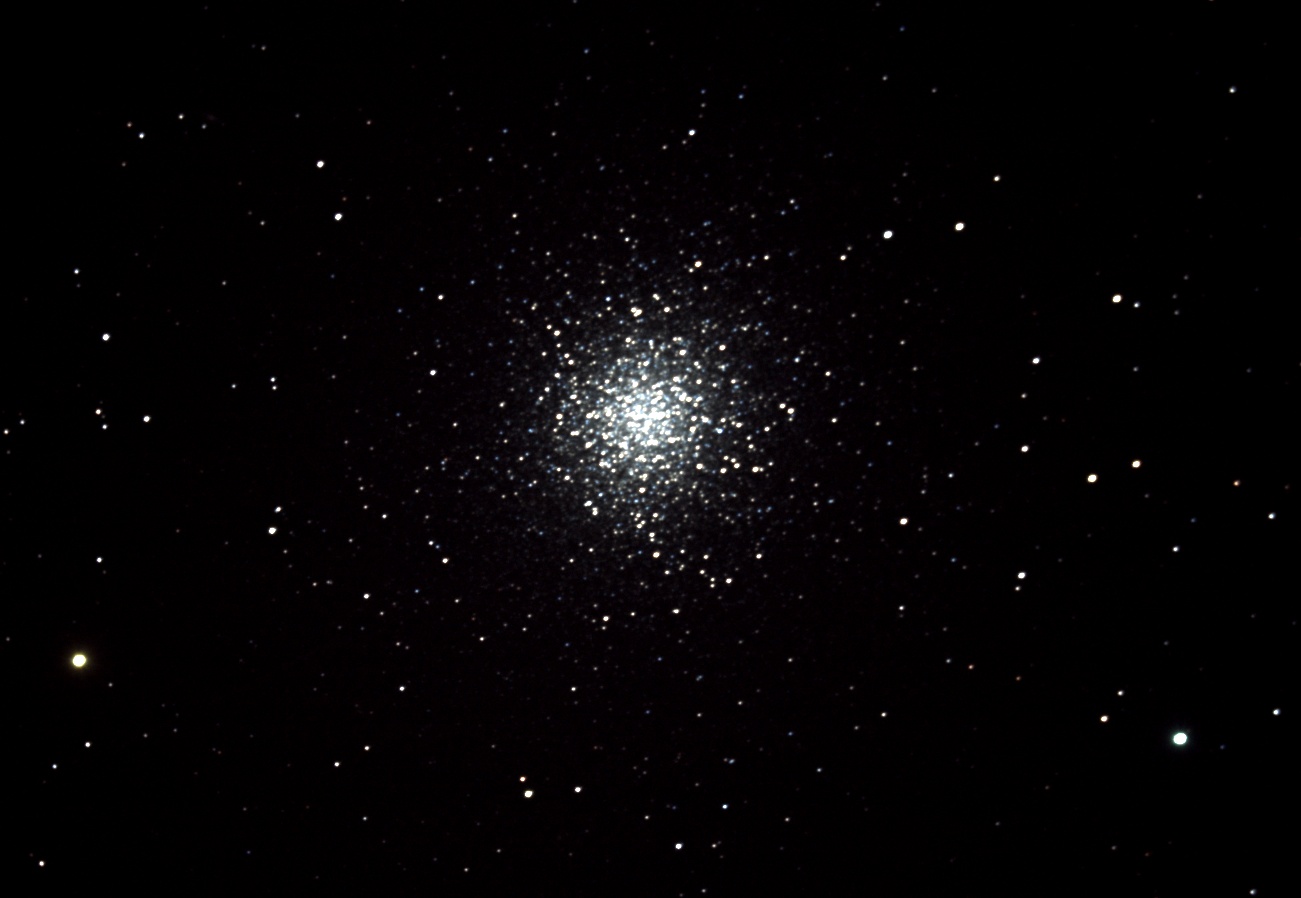 NGC104 (47 Tucanae) is the second brightest globular cluster in the sky after Omega Centauri. Globular clusters are massive concentrations of ancient stars that are some 12 billion years old. This cluster contains over a million stars within a diameter of 120 light years with a very compact core and is 13,400 light years distant.

Also captured within the image is NGC121 although it’s a little difficult to see in this compressed web image. It’s at the bottom of the frame, just to the right of centre, (click for the larger image and it looks like a slightly larger star). It’s a lot further away as it’s not associated with our galaxy but the Small Magellanic Cloud. Subsequently it’s very faint at magnitude 10.6. 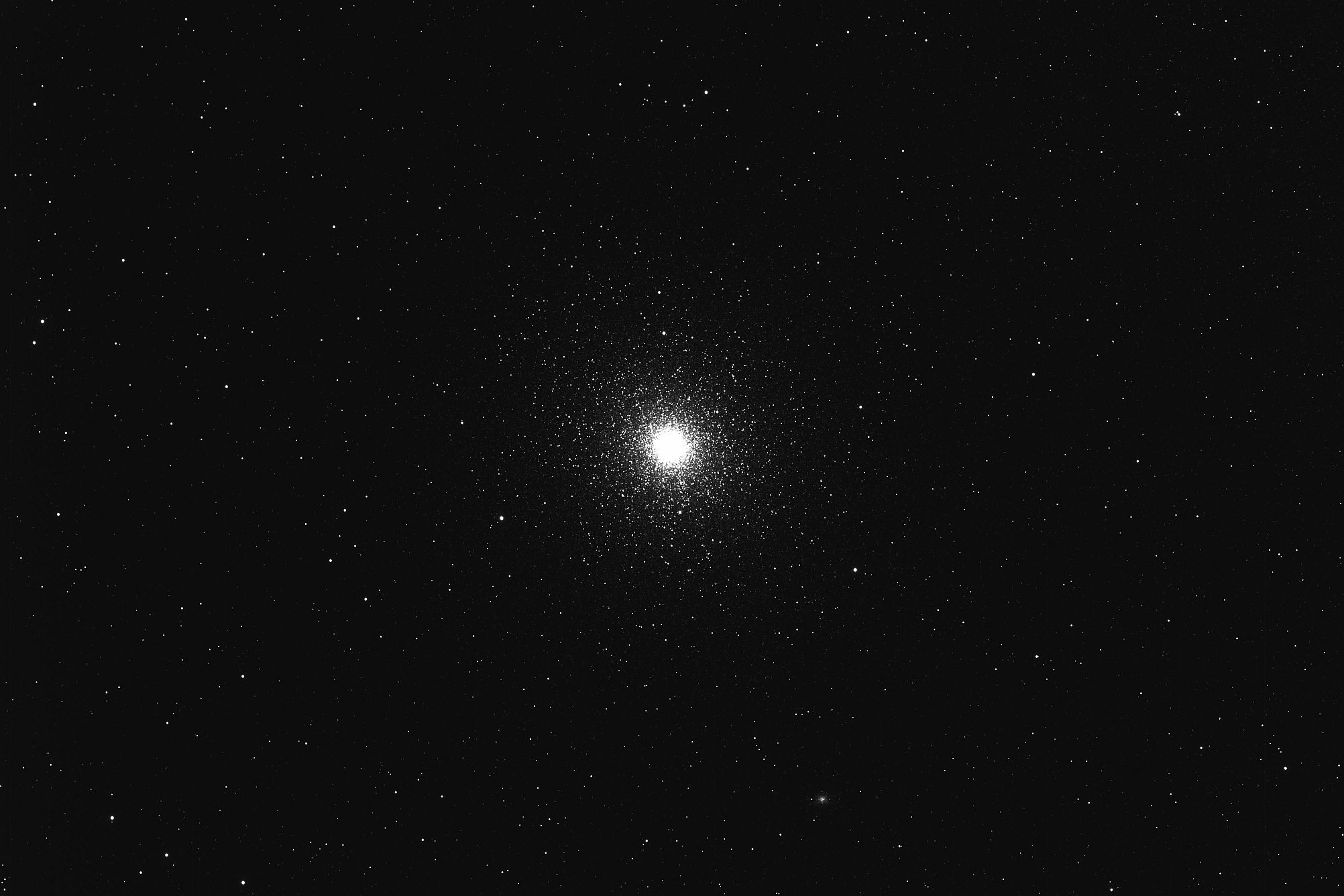 A half size TIFF copy of the original is available here: http://www.andrewluck.me.uk/Images/NGC104.tif